After a two-year hiatus due to COVID-19, the multicultural organization Walk It Out returns with a fashion show on April 9 at the Iowa Memorial Union. 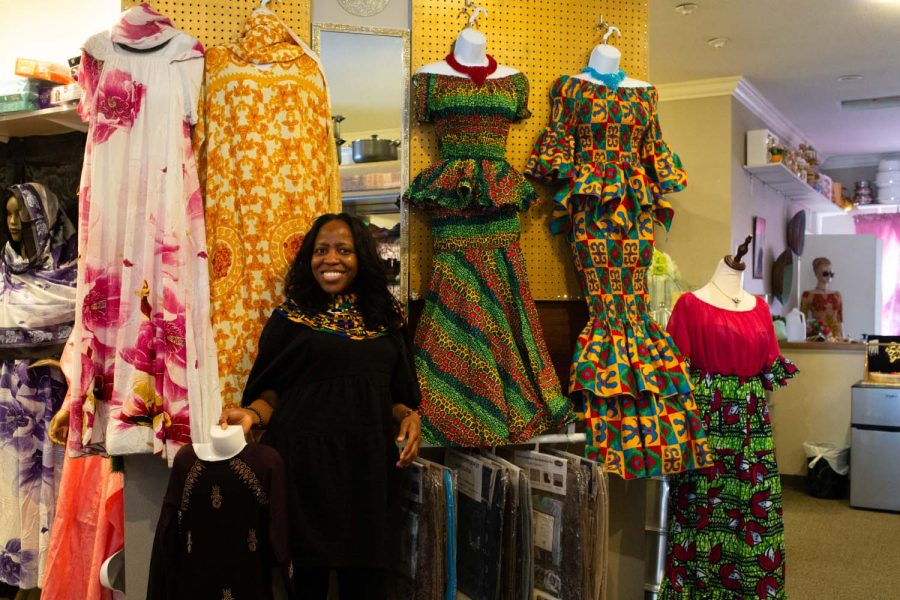 Naa Adjeiwa Tackie, the owner of Nana’s African boutique, stands alongside clothes from North Africa and West Africa in her store in Iowa City on Thursday, April 7, 2022. Tackie supplied clothes from her shop for Walk It Out.

Through song, music and fashion, the University of Iowa’s multicultural fashion show, Walk It Out, shares the culture with students and community members in the Iowa City area. The show will take place on April 9 in the Iowa Memorial Union Main Lounge.

RELATED: Walk it Out: the multicultural parade celebrates 10 years *

Each year, the student populations determine which groups are represented in the show depending on which cultures have students willing to lead each section. Amna Haider, president of Walk It Out, said the groups vary from year to year depending on who is involved in the organization.

Native American, East Asian, Latin American, African and South Asian as well as LGBTQ + and hip hop are seven different cultures that will be showcased this year through Walk It Out.

“This is the first time we have a Native American group since, I believe, the 2018 show,” said Haider. “As long as we have the power of the people to represent these groups, they are more than welcome to be a part of the show.”

Now, as a senior, Haider has taken on more responsibility for the group. Through her increased involvement over the years, she has been able to build strong relationships across campus. Haider and other members of the organization were able to make meaningful connections through Walk It Out, which Haider says is an important part of the group.

“We have made so many friends with so many different people who come from different corners of campus, including different people represented by each cultural group,” said Haider. “In terms of uniting underrepresented students on campus and building communities, I think that’s why this fashion show is so important.”

The parade is intended to educate the UI student body about the different cultures represented on campus. Mastura Ibnat, Vice President of Walk It Out, said that, being a predominantly white institution, it is important to organize multicultural events at the UI.

“It matters exactly how the culture presents itself to people in a PWI,” Ibnat said. “Do it in this very fun and palatable way where people can experience things that are very unifying, things like dance, fashion and music.”

Several local businesses support Walk It Out by various means. Vice and COPE Apparel are two Iowa City companies that sponsor the Hip Hop group by donating clothing for models to wear.

Nana’s African boutique also supports the show by donating and selling clothes to the African group in Walk It Out. Naa Adjeiwa Tackie owns the Iowa City business and is a graduate of the UI Tippie College of Business.

Tackie also helped the organization in 2012, 2018, and 2019. She said clothing longevity is what initially led her to clothing and fashion as an indicator of culture.

While in college, Tackie was able to watch the play evolve and grow over the years.

“When I started [school at] at the University of Iowa in 2005, there were very few Africans and very few black people at first, ”Tackie said. “To see that there are enough of them to the point where we are now able to show culture, you know, if there is anything I can do to promote it, why not?”

Almost a year ago, Tackie’s business faced closure due to eviction charges. Thanks to community support and Tackie’s persistence, his business was able to stay open and continue to serve the Iowa City community.

RELATED: The Iowa City community mobilizes in support of the alleged unfair eviction of a small business owner

Giving back to the people who supported her during those troubled times was essential to Tackie. As a symbol of strength for other entrepreneurs, Tackie said he wants to uplift Iowa City’s diverse communities and inspire others.

“Not only did I recover, I got back in step and actually helped my university and contributed,” Tackie said. “I’m giving back, somehow somehow, to both my school and my community.”

Celebration should be the main focus of the show. Organizers Haider and Ibnat both attested to Walk It Out’s ultimate goal: to present culture as something fun that everyone can enjoy.

“These are quite universally loved and appreciated aspects of the culture,” Ibnat said. “It’s pretty important that we do something like a fashion show, just because, of course, culture is a lot of fun at the end and we might as well show it to people.