For the Kremlin’s propaganda machine, reaching a new low is a real challenge. But he managed to do it again and again during the war in Ukraine, and there is probably no better (or worse) example than the story of the pregnant Instagram blogger from Mariupol who was surprised by the bombing of a maternity hospital. In the end, the Kremlin’s rotation didn’t work, but not for lack of trying (with the help of some useful idiots in the West).

On March 9, a week after Russian forces surrounded the southeastern city of Mariupol, a Russian airstrike struck hospital No. 3 of the city, a complex that housed a children’s wing and a maternity wing. The images were devastating: a pregnant woman, bleeding, obviously in shock, carried on a stretcher across the rubble-strewn hospital courtyard; another pregnant woman being helped down the stairs and then standing in the yard wrapped in a blanket, with cuts visible on her face. 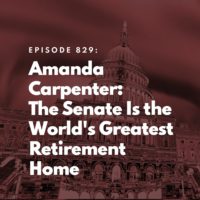 The rotation started almost immediately. On March 10, Russian Foreign Minister Sergei Lavrov said the hospital was “occupied by militants from the Azov battalion along with other radicals, who have established a base there” – although, somewhat confusedly, he simultaneously stated that the “radicals” were “turning people into human shields” and that “there [had] I haven’t been a woman, child or staff in this maternity hospital for a long time.

The Russian embassy in the UK promptly tweeted Lavrov’s statement, along with a photo of the aftermath of the bombing with “FAKE” printed on it in large red letters, and then it is followed by another tweet stating that “beauty blogger Marianna Podgurskaya… actually played the roles of both pregnant women [sic] The photos. “One of the women, the one who went down the stairs alone, was Podgurskaya himself; but she was indeed pregnant, a fact that could easily be ascertained by looking at her previous Instagram photos. The embassy recognized him, but only to insist that he was using “a very realistic trick” to fake his injuries and that he could not have been in the hospital at the time of the strike anyway, as “he was long taken by the neo-Nazi Azov battalion who told everyone staff to clear the place “. (The tweets were later removed from Twitter.) Russian ambassador to the Netherlands, Alexander Shulgin, repeated the lie in a TV interview, claiming with a straight face that Podgurskaya had “changed clothes” to play the latter. woman on stretcher.

Meanwhile, on this side of the Atlantic, former Trump staff member AJ Delgado intervened:

In early April, after the claim that Podgurskaya was the pregnant woman in both photos, it was easy debunked– and after the news that the woman on the stretcher, whose pelvis was crushed in the bombing, died after her stillborn baby was delivered by Caesarean section – the story took a new turn. A video interview with Podgurskaya (using her married name, Vyshemirskaya), who had given birth to a baby girl two days after the attack, appeared on the YouTube channel of Denis Seleznyov, a blogger of the self-proclaimed Donetsk People’s Republic. . Pro-Kremlin reports quickly turned it into evidence that the hospital strike was indeed a false flag.

There was no air raid, none of those present heard the sound of the planes, there was a bullet.
He confirmed that the Ukrainian army used the maternity hospital for its own purposes and also took away food from the women in labor.

Delgado ran back into the fray with a “I told you so”. 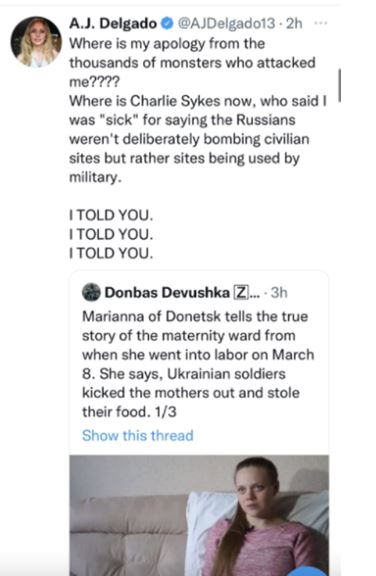 Again, as in Lavrov’s first statement on the bombing, the rotation presented two mutually contradictory theories: one, the hospital bombing was likely a Ukrainian false flag operation using a Ukrainian missile; two, the Russians bombed the hospital, but considered it a legitimate target because the Ukrainian army was using it as a base for firing at Russian troops. Some spinmeisters too kidnapped Vyshemirskaya’s claim that Associated Press photographers showed up almost immediately at the bombing site to insinuate that the attack was probably staged. (In fact, photographers arrived about 25 minutes after the explosion and filmed the plumes of smoke caused by a nearby building.)

But what did Vyshemirskaya actually say? Did he denounce the hospital attack story as a fake? As some have suggested, did you speak under duress, since you were clearly in Russian-controlled territory?

There is, in fact, absolutely nothing in the YouTube interview to suggest that the attack was staged. Yes, Vyshemirskaya (who had lived in the village of Makiyivka in the territory of the “Republic of Donetsk” until she married a man from Mariupol in 2020) claimed that her story about her had been misrepresented in the press. But the only significant discrepancy he identified was that both Ukrainian government officials and most media reported the attack as an air strike, while Vyshemirskaya said “no one” had heard an aircraft overhead. before the building was hit and that later, when the women had gone down to the basement for shelter, the hospital staff told them it was not an air strike. But, first of all, the alternative – rocket shelling – doesn’t look much better, unless the implication is that the rocket is coming from the Ukrainian side. And secondly, like the Washington Post reports, both eyewitness accounts and videos from Associated Press reporters strongly suggest an air strike, as well as physical evidence of “a crater outside the hospital at least two stories deep.” This does not mean that Vyshemirskaya is lying: an in-depth analysis of the Latvian site in Russian and English language Meduza quotes military experts who say that it is entirely possible not to hear the sound of a plane before a bombing, as that sound could only be audible. seconds before the explosion.

Furthermore, some of Vyshemirskaya’s statements in the YouTube interview with Seleznyov are clearly false. For example, she claims that the AP crew filmed her in the hospital courtyard against her stated will (although the footage posted on the AP website shows that she was not opposed to being filmed) and that, in a ‘ interview two days later, he told the AP there was no air strike. What she actually said was this: “I didn’t see with my own eyes where she was flying from, from where, what and in what direction. We do not know. There are many rumors, but in reality we can’t say anything. “It’s hard to say whether Vyshemirskaya is remembering wrongly, which would be completely understandable under the circumstances, or trying to please the authorities in the” Republic of Donetsk “where she has been. apparently evacuated (like it or not). However, it is worth noting that at some points during the interview, he deflects the interviewer’s attempts to make the Ukrainian forces look like bad guys. Evacuation corridors from Mariupol were rejected, the interviewer intervenes to clarify that the Ukrainian soldiers were the ones preventing them from leaving; but Vyshemirskaya’s response makes it quite clear that they could not leave because he was not safe.

As for the maternity hospital supposedly occupied by the soldiers, this is where the rotation of Vyshemirskaya’s real words turns into a real forgery.

What Vyshemirskaya says, as she explains how she ended up in that particular maternity ward, is that one different the maternity hospital of the city, the hospital no. 1, which had the best equipment, was not available because the soldiers had established a base there and the patients had been transferred to hospital no. 3. The reason why Ukrainian soldiers took over hospital no. he says, is that it had solar panels, ensuring a continuous power supply. (The interviewer makes a caustic comment that soldiers are given priority over pregnant women; but such decisions in a city under intense attack are not necessarily wrong.) Later, Vyshemirskaya says that on one occasion soldiers are went to hospital no. 3 and asked for food, saying they hadn’t eaten for several days. This is the narrative that Delgado’s retweeted account “Donbas Devushka” turned into “Ukrainian soldiers chased away mothers and stole their food”. (That account was subsequently permanently suspended by Twitter.)

In fact, after the interview was released, Vyshemirskaya made it clear in a Telegram post that the maternity hospital where the soldiers set up their base was not the hospital that was bombed:

Do not confuse it with the No. 1, which is a perinatal center and is located on the outskirts of Mariupol, that building was taken over by the military in late February. They asked all maternity patients to go home and sent the rest to hospital no. 3, where I was from March 6 to March 9. So it worked: there were workers, pregnant women and new mothers.

All in all, it is unclear whether Vyshemirskaya’s interview helps the Russian side that much. While her account casts doubt on whether the attack on the maternity hospital was an airstrike, it is still an attack on a maternity hospital that certainly hadn’t been cleaned up by patients and staff.

Furthermore, the strategy of the Kremlin’s propaganda machine is not to create a compelling alternative narrative, but to sow confusion and doubt. Who cares if it’s a royal reenactment of the old fable where a man who borrows his neighbor’s kettle and returns it broken claims he never borrowed it, that it was already broken when he borrowed it and who returned it intact? Pro-Kremlin accounts are still using Vyshemirskaya’s interview to suggest that Western media had hidden the truth about the hospital bombing. Fortunately, by now, only the useful idiots are still listening.