It is the symbol of the Swadeshi movement and was a forerunner in establishing its robustness as a fabric that is both powerful and modern in its interpretation. That is why khadi has found favor with the younger generation, as it transcends being called “slubby” and jhola chic to now being accepted as an effective means of communication. 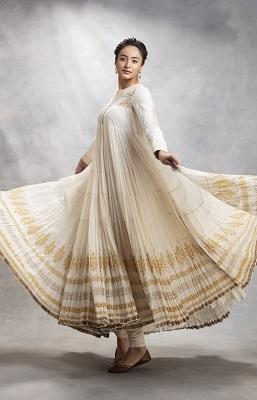 Sunil Sethi, president of the Fashion Design Council of India (FDCI), who is also an advisor to the Khadi and Village Industries Commission (KVIC), encouraged Traoré to visit India and try the various fabrics available at Khadi Gram Udyog. “We want to promote khadi as a sustainable fabric, a new age fiber that stays cool in the summer and keeps you warm in the winter,” says Sethi. “Traoré has created 16 garments in khadi silk, cotton and wool and we hope to make an international presentation soon. This will be on similar lines to what we did in Bhutan in the pre-Covid days, where even the royals showed great interest in the simplicity of khadi ”.

The key to making this avant-garde is to encourage young designers to create collections to woo millennials.

Anavila, based in Mumbai, bought khadi from Bardhaman, West Bengal, making it minimalist, making jackets and trousers with a light structure, not limited to conventional sarees, her forte. “Now you can get the best khadi braided threads up to 400 counts with a soft and buttery texture. We worked with 3D embroidery, with a new take on traditional animal motifs, “she says. Rina Dhaka decided to mix and match khadi with pure, her signature

Meanwhile, Parashar, known for her commercial banter, has been working with khadi for the past seven years. She fondly remembers a show she did exclusively with khadi in Paris, in a polo club owned by Hermès, where her long tunics made with the finest threads resonated with the culture of handmade. “My role as a designer comes into play to make sure that Varanasi’s khadi is not considered non-glamorous, so the effort was to digitally print it and add an element of simplicity,” she says. Embodying the nuances of spice, with minimal embroidery, Parashar’s dhoti and structured jackets can also be worn on vacation in Milan, making each garment universal.

What Covid has taught fashion is that “less is more”. With even pre-wedding events becoming more and more organic, khadi silk lehengas with ruffled blouses became the mainstay of Parashar during the lockdown months.

Modi, who has worked tirelessly with this fabric, believes that while the world is moving towards an austere approach to life, khadi fits well in a “satvistic” (pure, harmonious) way.

Coming from Vijayawada, Hyderabad, khadi’s purity is undeniable, he says. Unlike mill fabrics, it is spun on a charkha and not twisted or lit on machines. “If you see a painting by Amrita Sher-Gil, it captures the essence of women in Khadi saris. I added film print, resham, patchwork and was inspired by Telangana’s Bidri designs, “he explains. A recurring leitmotiv is the” Tree of Life “, which metaphorically means no beginning or end of life, of being “This is why it is used in temple architecture to indicate the immortality of the soul,” says Modi.

Known for its stretch churidars that redefined the way women wore their white cotton kurtas in the 1990s, Rina Dhaka believes the new innovations and interesting blends available in khadi are what makes it eye-catching. Coming from Jharcraft, Dhaka decided to mix and match it with pure, her signature, and then added an overwhelming dimension. “One of my first khadi collections, modeled by Simar Dugal, in the early 1990s was photographed by Asha Kochhar. I revisited those austere times through this line, ”she explains. Skirts with volume, dori work, kurtas in cotton lace and drawstring elevate the ensembles.

Darts and pleats also find a new interpretation, as Dhaka tries to give women the comfort of a safari suit. “Instead of embroidery, I prefer to use laser cuts and rippled effects, invisible but impactful,” she says.

Meanwhile, designer Abhishek Gupta has given khadi his signature fabric manipulation to demonstrate that you can use a myriad of techniques to create a buzz on the runway.